Venn diagrams are pictorial way of represent the set of article There, are different reverent regions which needs proper understanding for solving problems based on given Venn diagrams.

here IA represents only A

IB represents only B

IIAB represents A and B

1 – represents student passed in English only.

2 – represents student passed in Reasoning only

3 – represents student passed in both English Reasoning both.

4 → Doctor who is farmer also

5 → Engineer who is doctor also

6 → Engineer who is farmer also

7 → Person who is Engineer, doctor and farmer.

EXAMPLE 1: In the following venn diagram identify the number which denotes Doctor    who know both swimming and dancing. 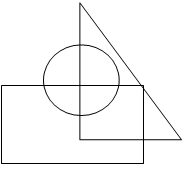 Sol. (c) Area 4 which is common to ∆ 0 and represents the required condition.

Note I-When one class of items is completely included in the another class of item and is represented by the given diagram.

Here all mango are fruit

Note 2: If two classes of item are completely different from each other but they all are completely included in third class then the relationship is represent of the diagram.

Note 3: If two group of items having some common relationship and both of them are all included in third class then the relationship is represented by the diagram.

Some Brother may be Father and all are male.

Note 4: When one class of item is completely included in another group while third is not related to both of them then such conditions are diagrammatically represented by

All cricketers are players but farmers not.

Note 5:- If three group of things are related to each other.

Graduate may be Engineer and Doctor.

Note 6: When two group of items are completely unrelated to each other while they are partly related with third group of item and is shown in.

Some cloth are Red and also some Flowers are red.

Note 7:- When group of items are completely different from each other

These are all different colour.

EXAMPLE 2: Diagrammatic representation of the following:

Girls and boys are students.

Some times venn diagram can be represented by different types of geometrical figures.

Give the answers of the following questions:

Region − 3, because this region is common between young persons and uneducated persons but not included in employed region.