A fertilizer is any material of natural or synthetic origin (other than liming materials) that is applied to soils or to plant tissues to supply one or more plant nutrients essential to the growth of plants. Many sources of fertilizer exist, both natural and industrially produced.

Plants are made up of four main elements: 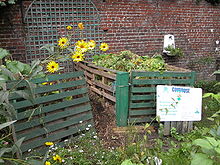