Ratio is strictly a mathematical term to compare two similar quantities expressed in the same units. The ratio of two terms ‘x’ and ‘y’ is denoted by x:y.

In general, the ratio of a number x to a number y is defined as the quotient of the numbers x and y.

COMPARISON OF TWO OR MORE RATIOS

These are equal if their cross products are equal; that is, if 3×8 = 4×6.  Since both of these products equal 24, the answer is yes, the ratios are equal.

Ratios are compounded by multiplying together the antecedents for a new antecedent and the consequent for a new consequent.
The compound of a: b and c: d Is a*c/b*d, i.e., ac: bd. When two ratios are equal, the four quantities composing them are said to be in proportion.

The terms a and d are called the extremes while the terms b and c are called means.

TO FIND THE MEAN PROPORTIONAL

Example : Find the mean proportional between 3 and 75.

Example: A courier charge to a place is proportional to the square root of the weight of the consignment. It costs ` 54 to courier a consignment weighing 25 kilos. How much more will it cost (in rupees) to courier the same consignment as two parcels weighing 16 kilos and 9 kilos respectively? TO FIND THE FOURTH PROPORTIONAL 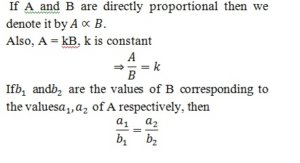 If on the increase of one quantity, the other quantity decreases to the same extent or vice versa, then we say that the given two quantities are indirectly proportional. In a problem on simple proportion, usually three terms are given and we have to find the fourth term, which we can solve by using Rule of three. In such problems, two of given terms are of same kind and the third term is of same kind as the required fourth term. First of all we have to find whether given problem is a case of direct proportion or indirect proportion. For this, write the given quantities under their respective headings and then mark the arrow in increasing direction. If both arrows are in some direction then the relation between them is direct otherwise it is indirect or inverse proportion. Proportion will be made by either head to tail or tail to head.

The complete procedure can be understood by the examples.

Example:  A man completes 5/8 of a job in 10 days. At this rate, how many more days will it takes him to finish the job? A partnership is an association of two or more persons who lives invest their money in order to carry on a certain business.

Partnership is of two kinds:

If the period of investment is the same for each partner, then the profit or loss is divided in the ratio of their investments.

Example: Divide `581 among A, B and C such that four times A share is equal to 5 times B’s share which is equal to seven times C’s share.