Pollution is when something is added to the environment harmful or poisonous to all living things.  In other words, pollution means a sudden change in the environment due to emission of pollutants such as carbon monoxide etc. Pollution is thus direct or indirect change in any component of the biosphere that is harmful to the living components and in particular undesirable for man, affecting adversely the industrial progress, cultural and natural assets or general environment of living society. 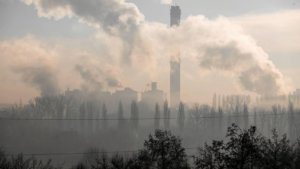 Air pollution occurs when harmful or excessive quantities of substances including gases, particulates, and biological molecules are introduced into Earth’s atmosphere. It may cause diseases, allergies and even death to humans; it may also cause harm to other living organisms such as animals and food crops, and may damage the natural or built environment. Both human activity and natural processes can generate air pollution. Water pollution is one of the greatest crises facing the country. The largest source of it is the sewage water without treatment, as also water coming from pesticides-ridden fields, and chemical waste producing small and big industries. In addition to the acute problems of water pollution in developing countries, developed countries also continue to struggle with pollution problems. Noise pollution is generally defined as regular exposure to elevated sound levels that may lead to adverse effects in humans or other living organisms. According to the World Health Organization, sound levels less than 70 dB are not damaging to living organisms, regardless of how long or consistent the exposure is. Exposure for more than 8 hours to constant noise beyond 85 dB may be hazardous. If you work for 8 hours daily in close proximity to a busy road or highway, you are very likely exposed to traffic noise pollution around 85dB. Light pollution, also known as photo pollution, is the presence of anthropogenic light in the night environment. It is exacerbated by excessive, misdirected or obtrusive uses of light, but even carefully used light fundamentally alters natural conditions. As a major side-effect of urbanization, it is blamed for compromising health, disrupting ecosystems and spoiling aesthetic environments.