Line: A line has length. It has neither width nor thickness. It can be extended indefinitely in both directions.

Line segment: A line with two end points is called a segment.

Angles: An angle is the union of two non-collinear rays with a common origin. The common origin is called the vertex and the two rays are the sides of the angle.

Congruent angles: Two angles are said to be congruent, denoted by if it divides the interior of the angle into two angles of equal measure.

Adjacent angles: Two angles are called adjacent angles if they have a Common side and their interiors are disjoint

Linear Pair: Two angles are said to form a linear pair if they have common side and their other two sides are opposite rays. The sum of the measures of the angles is 180°.

Alternate angles: In the above figure, 3 and 3, 2 and 8 are Alternative angles.

When two lines are intersected by a transverse, they form two pairs of alternate angles.

In figure given below, lines PQ and RS intersect each other at point O. If POR; ROQ = 5:7, find all the angles. and SOQ=POR = 75° (Vertically opposite angles) TRIANGLES
The plane figure bounded by the union of three lines, which Join three non-collinear points. Is called a triangle. A triangle la denoted by the symbol ∆.
The three non-collinear points, are called the vertices of the triangle.
In ΔABC, A, B and C are the vertices of the triangle; AB, BC, CA are the three sides, and ∠A, ∠B, ∠C are the three angles. 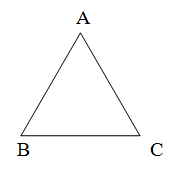 Altitude (height) of a triangle: The perpendicular drawn from the vertex of a triangle to the opposite side is called an altitude of the triangle.

Orthocentre: The point of intersection of the three altitudesof a triangle is called the orthocentre. The angle made by any side at the orthocentre = 180°- the opposite angle to the side.

Centroid: The point of intersection of the three medians of a triangle is called the centroid. The centroid divides each median in the ratio 2:1.

Circumcentre: The point of intersection of the perpendicular bisectors of the sides of a triangle is called the circumcentre.

Incentre: The point of intersection of the angle bisectors of a triangle is called the incentre. 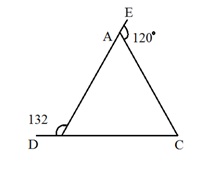 As DBC is a straight line,

∠EAC is an exterior angle

Thus, we find that ∠BCA>∠ABC

⇒ AB > AC (side opposite to greater angle is greater)

A plane figure formed by three or more non-collinear points joined by line segments is called a polygon.

The sum of the measures of the angles of regular polygon is 2160°. How many sides    does it have?

Hence the polygon has 14 sides.